Today as I was browsing updates an Facebook, I came across this post by local singer-instructor Brodie Perry. (This guy was singing opera professionally at age 17)

“In our world right now everyone is so much more interested in being critics than enjoying music. I think YouTube and American Idol has given people the idea that life is about listening with critical ears rather than actually hearing. Gone are the days when we made music for the love of it. Now it’s more about “making it” than making music.”- Guy Babusek

I totally agree. Let’s jam some more, singing just for the fun of it.

“As a teacher of singing it can be difficult at times to shut off my critical mind and want to fix things rather than allowing imperfections that are inevitable just be what they are and enjoy the music. It takes a conscious effort for some of us, but a necessary one.”
I asked if I could quote him. He responded that I’d be quoting Babusek.
Well, I quoted both of them.
You should visit the page and get all the comments.
https://www.facebook.com/brodie.perry
Comments from Amy Seifert, Bruce Bennett and other pros, even a video link to:
Stevie Nicks – Wild Heart – Live Demo – 1981

You’ll have to go to Brodie’s Post to get that link.

Catch you next time.

This is a tribute to a great lady singer.

Who passed away on April 20th of this year.

I’ve always enjoyed her singing and films. She didn’t like the character Deanna and escaped the studio film industry to become a wife and a mother, you know, a real person.  But she left behind a great work of inspirational films.  I’ve spend hours the last several months watching as many as I could find on You Tube; even those that had Russian dubbed overs.

I’ve watched some many times. But dislike the ads, the parts, and all the other annoyances of the internet while enjoying the films and her fabulous and inspiring voice.

Now there is a great solution for fans like myself.

Here we go! Get you own copies of her films. 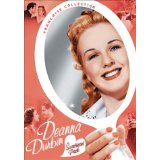 This one includes: Three Smart Girls( three sisters save their parents’ marriage), Something in the Wind(Deanna and Donald O’Conner both sing the Turntable song-a DJ classic), First Love(a modern day Cinderella type story), It Started with Eve(a cute romance), Can’t Help Singing(a musical tale set in the old west-filmed in Southern Utah and the only Durbin film done in Technicolor as the producers said they couldn’t afford both Durbin and color), Lady on a Train(a comical who done it mystery).

I bought this one.

Or this is in my mind the best of them all.  The Amazing Mrs. Holliday   (Eight orphans, a sea captain, and romance set in WWII) 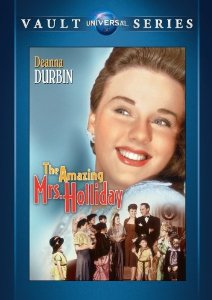 Just click on the name and be taken to Amazon where you can purchase a copy of that collection or browse for any of her films.

Go now and start to get to know her.  I’m sure she’ll be smiling in heaven.

Catch you next time.

hoveneIn the Movie “It started with Eve” Deanna Durbin sings  happy lyrics to a classic piece of music.  It tells how singing effects her.

I shared a link  to her “Can’t Help Singing” in the post titled:

I get revitalized when I’m tired; happy when I’m sad, and just feel better.

It’s kind of hard to stay sad when you are singing. I guess that’s what the Neil Diamond song “Song Sung Blue” tells about, what song can do for a person.  Can’t get him here so I recorded a version of the song.

4 women and 1 man commented on my rendition. Now you have a chance but if you can’t say it’s good, don’t say anything please.

What songs can you suggest about the joy of singing?

I first wrote this post on May 8.2013. But no one has commented so I will. Most comments coming to sites like this are just automated advertising. You must know I won’t approve those.

Singing is joyous!  Just look at those in this street concert audience.