Singing, Acting, And Movement In Opera: A Guide To Singer-getics 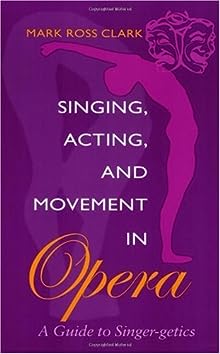 If you feel you are in the need for some instruction to become a Great singer, then these books may have some direction for you.

I’ve heard Jerome Hines sing on occassion and had not realized that he had done a book about singing wherein he interviews great singers.

American
operatic bass who performed at the Metropolitan Opera from 1946 to 1987. Standing 6 ft 6 in (1.98 m), his stage presence and stentorian voice made him ideal for such roles as Sarastro in The Magic Flute, Mephistopheles in Faust, Ramfis in Aida, the Grand Inquisitor in Don Carlos, the title role of Boris Godunov and King Mark in Tristan und Isolde.  Hines made his operatic debut at the San Francisco Opera in 1941.    In 1946, Hines made his debut at the Met. In 1953, Hines made his European debut. Hines turned to coaching later in his career, founding the Opera-Music Theatre Institute of New Jersey in 1987, but he continued performing virtually until the end of his life; among his last appearances was a concert performance as the Grand Inquisitor with the Boston Bel Canto Opera in 2001 at the age of 79.

Hines maintained his interest in mathematics, one of his college majors, and occasionally published articles on the subject in mathematical journals; an example is an article “On approximating the roots of an equation by iteration” in the January/February 1951 issue of Mathematics Magazine.

Hines died of undisclosed causes in 2003, at age 81 at a Manhattan hospital.

Hines was married to the soprano Lucia Evangelista from 1952 until her death from amyotrophic lateral sclerosis in 2000. They had four children, David, Andrew, John and Russell. For most of his life, he lived in South Orange, New Jersey

Hear him in an early recording @   http://www.youtube.com/watch?v=0BEYiDUB670

Hear him as an older man still singing @ http://www.youtube.com/watch?v=8YaH4ZVwpqs  He wrote the opera this song was in.

Hear him when old with Old Man River: http://www.youtube.com/watch?v=lii5V2VjUQ4                      I Iintroduce this song as the Basses National Anthem when I sing it because of Jerome Hines calling it that. He was 74  and still healthy and sounding healthy because of singing I’m sure.

The other books you’ll need to research on your own. And now to the books. investigate and buy the ones you need and learn better how to be a great singer while having fun and staying healthy.

Some things are planned such as singing groups performing at Christmas time.

When I attended Brigham Young University, I was in the Opera Workshop group and at Christmas time we, the Men’s Chorus, women’s Chorus, the Accappella Choir and several other singing groups got together on different levels of the open court area of the Fine Arts Center on campus and did a Christmas concert.

Each group performed something of their own and then all sang the Hallelujah Chorus from Handel’s Messiah at the end. The sound was phenomenal.

We had a lot of fun.

Every year the fun continues to grow with the flash mob surge where planned can start something but where spontaneous things can grow from it.

Here are some fun examples that I ran across on You Tube tonight.

Go and watch each one and then come back and get the link to another one.

Flash Mob 2010. So we have been doing community projects with the Red Cross in Grand Rapids for awhile now and wanted to do something fun for the Holidays. So here it is! We gathered a ton of people, over 300, including renowned groups such as the Grand Rapids Chorus of the Sweet Adenines and the Great Lakes Chorus. Together, with a ton of volunteers excited to spread Holiday cheer, we sang “Do you hear what I hear” to an unsuspecting Shopping crowd at the Rivertown Mall in Grand Rapids, MI.
The event itself was fun, but we are also trying to help support our partnership with the American Red Cross. They do a ton of great things here in Grand Rapids and throughout the world. Please help support them as well. We hope everyone enjoys the video. Special thanks to all the volunteers who helped bring this to life! Happy Holidays, Griffin Properties (Keller Williams) Grand Rapids, MI.  http://www.youtube.com/watch?v=hCe1bEgyCws

Over 200 singers helpped in this awesome food court flash mob!! This took place at the Burnsville Center in Burnsville Minnesota. This flash mob was organized by Prince of Peace Lutheran Church!    http://www.youtube.com/watch?v=9865b-K9s2w

See how much fun singing can be.

Here are some more links to some fine singing events by ordinary people and trained people alike.

On Saturday, October 30, 2010, the Opera Company of Philadelphia brought together over 650 choristers from 28 participating organizations to perform one of the Knight Foundation’s “Random Acts of Culture” at Macy’s in Center City Philadelphia. Accompanied by the Wanamaker Organ – the world’s largest pipe organ – the OCP Chorus and throngs of singers from the community infiltrated the store as shoppers, and burst into a pop-up rendition of the Hallelujah Chorus from Handel’s “Messiah” at 12 noon, to the delight of surprised shoppers.          http://www.youtube.com/watch?v=wp_RHnQ-jgU

Wasn’t that a great sound?  Notice the enthusiasm of the crowd both those singing and those listening?

Here’s one more from Dublin where at 12:40pm on Sunday the 16th of October, 2011, hundreds of people from choirs all from all over the country joined forces to sing the Hallelujah Chorus in front of unsuspecting shoppers. The flash mob was the grand finale of RTÉ Big Music Week and was organised by RTÉ Radio 1.       http://www.youtube.com/watch?v=3M3y2YD6Qy4

Well that one ended abruptly.

This one is very good. A welcome home to remember in one the most crowded airports of the world, Heathrow Terminal 5
International arrivals / It’s so good to be back home! http://www.youtube.com/watch?v=ZMG2vNVq0ww

You’ll just have to go out and form your own spontaneous sing along.

Until next time. Keep singing.